As of March 2019, the last five times White Sand Lake was stocked with muskellunge and walleye fingerlings was 2018, 2016, 2014, 2012, 2010. The populations of both species are good and self-sustaining. Cicso, yellow perch, and white sucker are the primary forage species. Pumpkinseed sunfish and bluegills are numerous and average sized. According to the Wisconsin Department of Natural Resources Fish Stocking Summary:

The history of White Sand Lake, including how uses of the lake have changed over time, parallels the history of the other lakes in the Bear River Watershed. For hundreds of years White Sand Lake was used by indigenous people for subsistence and named, Lake Wepetangok. Virtually every facet of their lives depended on their relationship with the lake and its surrounding habitats for food, medicine, building materials, and transportation. With the arrival of the Europeans in the early to midseventeenth century, White Sand Lake and the surrounding habitats took on a new use: to help provide the world with furs. Lac du Flambeau became a transportation center for the fur trade, and White Sand Lake became part of the network of canoe routes and portages which linked Lac du Flambeau with trade routes in all directions. White Sand Lake, for example, was part of the primary route linking Lac du Flambeau with Lac Vieux Desert to the northeast.

By 1840 the fur-bearing animals were gone and White Sand Lake and its surrounding habitats took on another new use: to provide the country with timber and timber products. To facilitate the movement of logs from White Sand Lake to the mills on Long Interlaken Lake, a dam was constructed at the confluence of Flambeau Lake and the Bear River. Hutton’s Creek (Sand Creek) connects White Sand Lake at its southwest end with Pokegama Lake. The dam there was likely built originally by the Tribe in the mid-1870s. When property on White Sand Lake was subsequently sold, the creek and dam transferred to private ownership. In 1940, the Town of Lac du Flambeau paid August Wolff $135 to replace the original dam which had washed out.

In the 1900s, Marvin Hewitt (Hughitt), the president of the Chicago and Northwestern Railroad, decided he wanted to take his steam launch with his guests fishing in more than one lake. Railroad construction crews dug about four miles of ten-foot wide canals to link White Sand, Sunfish, Crooked, Little Trout, and Ike Walton Lakes.

Creating an ambitious estate for fishing, using canals and the Chicago North Western Railroad for access, Richard Southgate and Marvin Hewitt fashioned their personalized Northwoods community.
The canals created a link between the isolated retreat on Little Trout Lake and the modern world. Southgate and his guests enjoyed the finest delicacies of the world, furniture and decorations from Southgate’s international travels, and modern conveniences like electricity. Dolly Tirpe (Robert Loveless daughter) reported:
Huge expenditures for French Champaign and barrels of live lobsters were common. Both Richard and Ella chose an open marriage, and their boyfriends and girlfriends also enjoyed time at Little Trout Lake.

In 1910, George Goller built the first tourist cabins on White Sand Lake. In 1918 Gust Peterson and his two brothers, Fred and Oscar, bought the 35-acre peninsula and the property to the east and west as a retreat center for their families. In 1923, Gust Peterson sold his 35 acres on the peninsula on a land contract to his nephew Ben C. Gauthier, who constructed a hotel and 13 buildings on the 35 acre site and began work in the resort business.

Dillman’s Resort was born in 1934 when Marvin and Peg Peterson Dillman purchased the same 35-acre property on a land contract from Peg’s father, Gust
Peterson. In order to help keep the resort, Marvin and Peg tried raising chickens, mink, and milk cows plus held winter jobs in Chicago. In 1970 the present owners, Sue (Marvin and Peg’s daughter) and Denny Robertson, took over managing the resort.

One of the cabins on the property today sheltered Baby Face Nelson who was on the run in April 1934 following a shootout at Little Bohemia in Manitowish Waters. At the time Baby Face Nelson used the cabin, it was the home of Ollie Catfish and was located across the lake from Dillman’s. In 1935, Peg and Marvin Dillman moved the then empty building across the frozen lake for use as a cabin for their patrons.

In 1923, a second of the Peterson brothers, Oscar, opened a small resort west of his brother Gust’s property. Eventually he sold the resort to Joyce and Bob Watson who ran Watson’s Holiday Beach Resort for 25 years. The third Peterson brother, Fred, also sold his property, which eventually became the present White Sand Resort.

In 1922, 11 families from Winnetka, Illinois purchased 90 acres with frontage on both White Sand and Little Sand Lakes for a private camp. They called it Camp Wipigaki, Ojibwe for Red-at-the-Leaf. By 1925 Wipigaki had grown to 500 acres and had cabins and a common dining hall. By 1945 there were over 100 resorts and 1000 summer homes around Lac du Flambeau lakes. By the 1960s, tourists could choose among several resorts on White Sand Lake, including Anderson’s Resort, Field’s Log Cabin Resort, Schmidt’s Breezewood Resort, Watson’s Holiday Beach, and
Dillman’s Sand Lake Lodge.

September 28.– The Pokagoma, arm of Lac du Flambeau, which we crossed this morning, is about three and a half miles long by half a mile in width. It abounds with fine fish, which the Indians take in great numbers in gill nets and with the spear. From the northeast shore of this lake a portage of half a mile, over sand hills, covered with small pines and elevated about thirty feet above the general level of the small lakes, leads to Lake Wepetangok (renamed Big Sand Lake, currently named White Sand Lake), which we crossed in a high wind. This lake is about two miles long, and our course across it was northeast to a small channel, four feet wide and eight yards long, which led us into another small lake threefourths of a mile long and half a mile wide, which we crossed northeast to a portage of one mile in length, leading to Mashkegwagoma lake (currently named Pokegama Lake). This portage passed over hills of the same character as those seen in the morning. 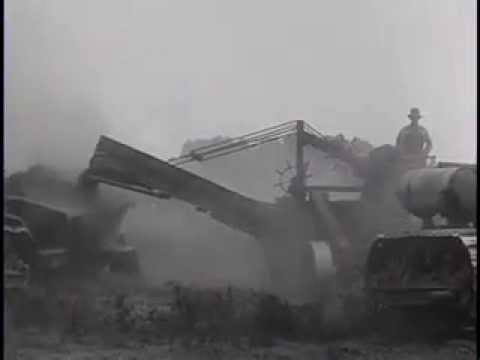 The CCC on Indian Reservations

During the New Deal era, tens of thousands of Indians enrolled in the Civilian Conservation Corps. This brief film clip shows some of their work. The clip is from a longer film created by the U.S. Department of the Interior, and is provided courtesy of the National Archives.